The complex Florida insurance laws and crafty insurance companies can muddle the process of obtaining compensation for motorcycle accident victims. For this reason, it is crucial for injured motorcyclists, or their loved ones, who are acting on their behalf, to hire a motorcycle accident attorney with ample experience managing such types of claims (or lawsuits).

In case you or your loved one has sustained injuries in a motorcycle accident, you may have the legal right to be compensated by the at-fault party. To learn more about your accident-specific legal rights, consult with our experienced accident lawyers today!

Why Should You Hire an Experienced Motorcycle Accident Lawyer in Clermont?

It can be difficult for a motorcycle accident victim to obtain recompense after the incident, particularly if they try to file their claim without the help of a qualified motorcycle accident lawyer in Clermont. Since personal injury insurance protection (PIP) in few states is only needed for automobiles with 4 or more wheels, motorcycle riders are not allowed to have PIP coverage.

Even if the motorcycle rider owns a four-wheeler, which is covered under PIP insurance, the coverage doesn’t apply to the accidents involving a motorcycle. In case the motorcycle rider is uninsured, they may find it difficult to pay for hefty medical expenses, particularly if their injuries prevent them from being present at work.

If you have sustained injuries in a motorcycle accident, an experienced Clermont motorcycle accident lawyer can walk you through your options to seek compensation so as to cover your losses that may further be augmented by circumstances like medical malpractice, etc.

Contacting a skilled attorney soon after the incident allows them to start collecting necessary information and evidence immediately to support your motorcycle accident claim. To help you create your accident claim, your lawyer may:

Motorcycle accidents may involve serious injuries that require urgent medical attention. After you receive the required medical care, you must do the following:

It is to be noted that you cannot expect to get a fair settlement claim amount without hiring a Clermont motorcycle accident attorney since insurance companies try their best to keep the compensation amount as low as possible. 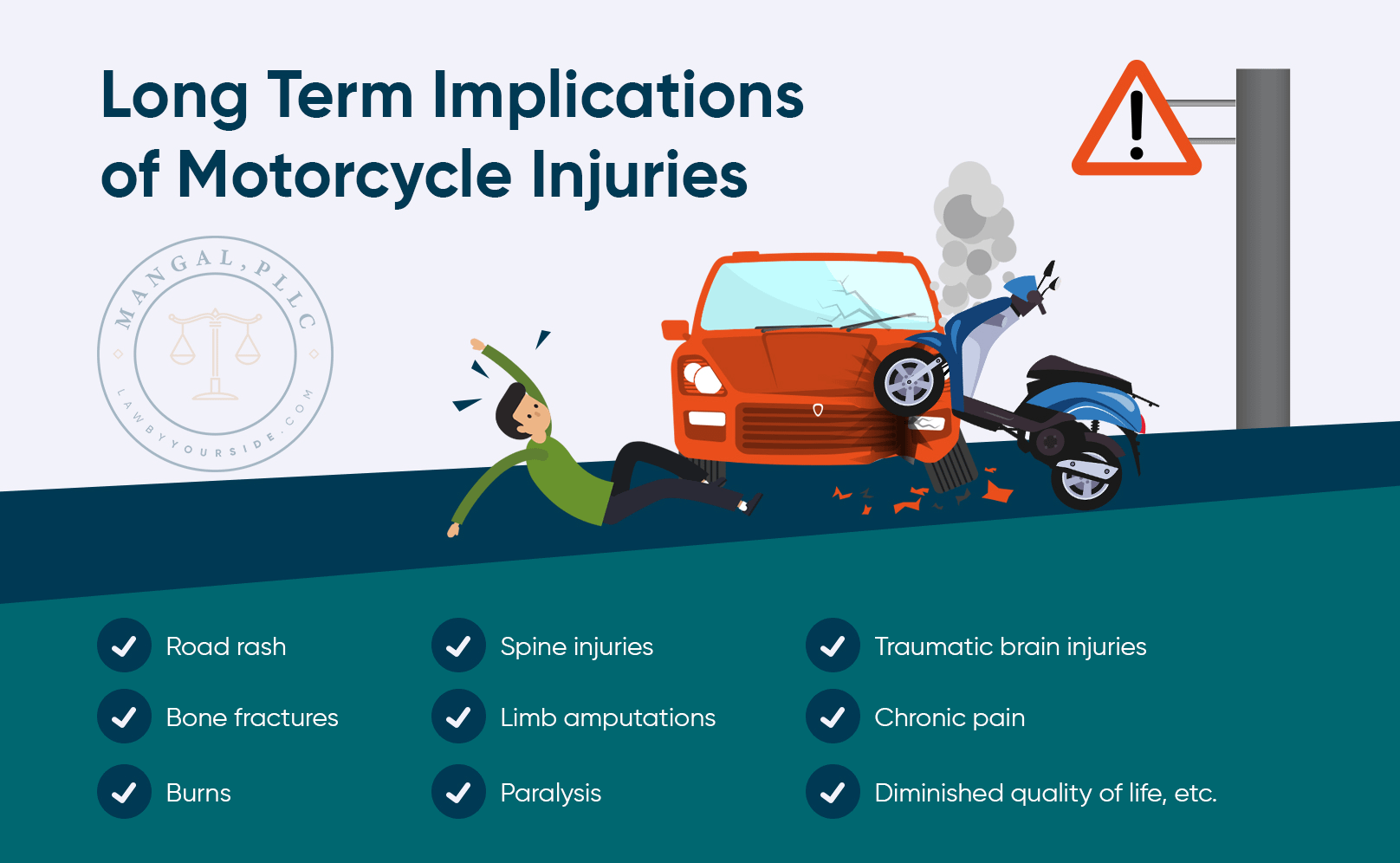 If the motorcycle rider was not at fault, they may seek recompense from the other party, whose negligent behavior led to the accident. Although motorcyclists are not covered under PIP insurance, they are not restricted by the same. In simple words, insured motorcyclists are not restricted with respect to the damages they may seek to cover their losses, including suffering and pain.

Post-accident, your motorcycle crash attorney will contact the insurer of the at-fault party to negotiate a settlement to cover the losses due to the accident. They may use the gathered information to file a claim against the insurance company. If the outcome of the negotiations with insurers is unsatisfactory or unsuccessful, you can take legal action against the at-fault party with the help of your motorcycle accident lawyer in Clermont, Florida.

Motorcycle accidents are basically personal injury cases; hence, based on the concept of “negligence.” This means, your motorcycle crash attorney will require to establish that the other motorist involved in the accident was at fault as they failed to meet a reasonable standard of care. To prove this, your accident lawyer will perform an investigation to learn more about the other party – if he/she violated the traffic rules, failed to pay attention to his/her surroundings, or was driving under the influence at the time of the accident.

In several cases, a defect in your vehicle, or the other party’s automobile might be the cause of the accident. In such situations, you can file a claim against the manufacturer of the defective automobile or its part. Your attorney will carry out an investigation to figure out if the car had any defects before the accident. Along with the forensic team, your accident lawyer will find if:

The faulty motorcycle or its part was “unreasonably risky”

The motorcycle was operated as it should be

The motorcycle’s performance hadn’t altered since its purchase

Faulty tires, brakes, accelerators, and defective fuel systems are some examples of the defects for which you may file a product liability case against the manufacturer.

If you have lost a loved one in a motorcycle crash, you may have the legal right to recover compensation via a wrongful death lawsuit. An experienced Clermont motorcycle accident attorney can help the surviving family members prove that the negligence of the at-fault party caused the death of the motorcycle accident victim.

While negotiating a claim or filing a lawsuit against the insurance company or the at-fault party, experienced Clermont motorcycle crash attorneys at MANGAL, PLLC can work on your behalf to recover recompense for:

Motorcycle crashes can happen because of various reasons, including negligent driving. Negligent acts that may lead to accidents are as follows:

Motorcyclists have less protection from the risky elements and other vehicles on the road. Therefore, injuries sustained in a motorcycle accident crash can be severe or life-threatening. These may include:

The fact that motorcycle accidents can lead to far more serious injuries than any other vehicle itself explains why it is necessary to hire a qualified motorcycle accident lawyer in Clermont, Florida. The following tips will help you hire the right motorcycle crash attorney to represent your case:

Putting Skilled Clermont Motorcycle Accident Attorneys at MANGAL, PLLC to Work for You

AT MANGAL, PLLC – Clermont Personal Injury Law Firm, we work closely with injured motorcycle accident victims and their families. We believe in giving personalized attention to our clients and the support they deserve. Our qualified Clermont motorcycle accident attorneys thoroughly listen to our clients and their stories, including how the crash occurred, what injuries they sustained, and how the injuries affected their lives. We also try to understand your worries and fears and work toward offering you peace of mind during your darkest phase.

Even if you are not sure you have a legal case, our accident lawyers can talk to you to explain all your legal options. After a motorcycle accident, victims usually don’t have the time and energy to deal with their insurers. Our motorcycle accident attorneys in Clermont can take the legal burden off your shoulders so that you focus solely on your recovery.

As a reputed Personal Injury law firm in Clermont, Florida, we have the experience and resources to handle complex and large motorcycle injury cases, successfully. Call our skilled motorcycle crash lawyers to know how we can help you after a motorcycle crash. We are committed to helping motorcycle accident victims and their families receive the best compensation possible to bring their life back on track.